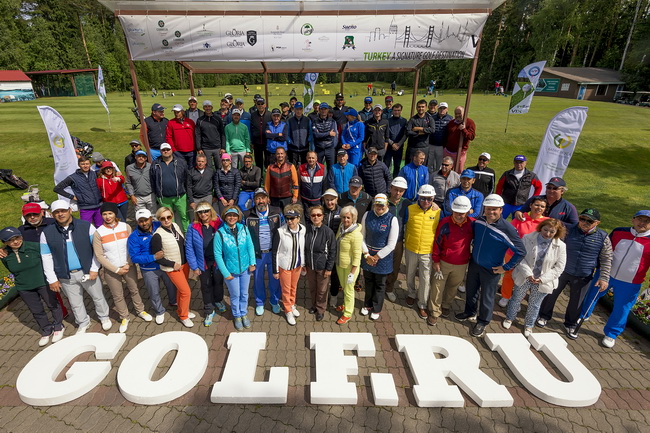 Annual traditional tournament Golf.ru Invitational has been placed on the field of Moscow Country Club in Nakhabino.

The annual traditional tournament Golf.Ru Invitational was held at the Moscow Country Club in Nakhabino, near Moscow. The organizer of the tournament is the portal GOLF.RU - Russian Internet resource, entirely dedicated to golf. The tournament was held with the support of AGR.


For the fourth year, on the first Wednesday of June, this golf holiday - Golf.ru Invitational - is taking place. Early on the morning of June 6, 84 players, who made up 21 quartets, moved to the direction of Nakhabino outside Moscow, under the noise of a summer rain. By the beginning of the warm-up at eight in the morning the weather became warmer, the sun came out, but the temperature of +12 remained so all day.

This year the tournament returned to its initial personal-team version with the game in the format of the stubbleford points.

At stake were 34 cups and very interesting prizes from partners!

And the main action of the tournament Golf.ru Invitational 2018 - team standings. The assets of the team were summarized with three best results out of four on each hole. In two nominations - with and without handicap. Three prizes in the nomination, and this is another 24 cups in the draw.

In the season of 2018 the general partner of GOLF.RU was the tourist agency Vix Golf, widely known for organizing a large-scale series of tournaments Regnum Moscow "Battle of clubs", Regnum Moscow Winter Challenge and numerous tournaments of Pro-Am. Vix Golf has provided the winners with golf courses and accommodation in Belek hotels: Cornelia, Kempinski, Sueno and Lykia World, which were presented by Lazzat Kiziltugca, who arrived from Turkey. A full report with the results of the tournament can be seen at http://golf.ru/news/v_rossii/golf_ru_invitational_2018_itogi/